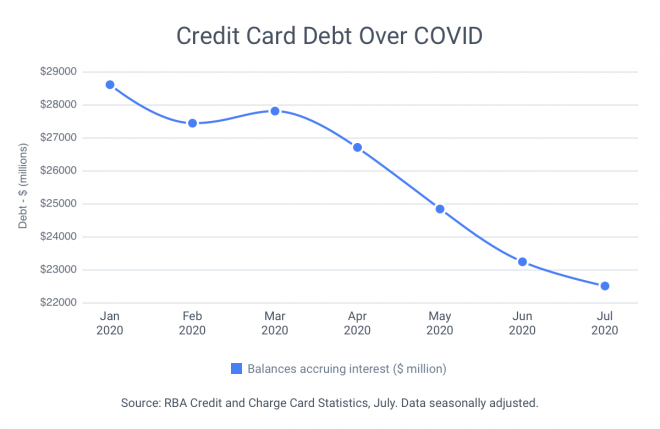 Australians have paid off enormous amounts of credit card debt since we entered lockdown, according to new statistics from the Reserve Bank.
Between March and July, the most recent month for which there is data, Australian consumers reduced their credit card debt from $41.3 billion to $34.7 billion – a drop of 16%.
This is the lowest amount since 2006.
Consumers not only paid off old credit card debt between March and July but also cut back of new spending:
At the same time, as the graph shows, the amount of interest being accrued on all credit cards (both personal and business) fell from $28.2 billion to $22.5 billion, a drop of 20%.
It seems Australians have responded to the economic crisis by cutting back on non-essential spending.
If you’re thinking of taking out a home loan and you’ve been eliminating your credit card debt – smart move. Your borrowing power can significantly improve if you have less credit card debt and a lower credit card limit