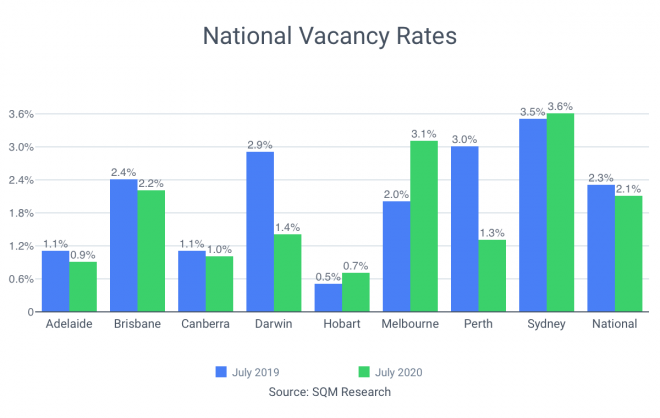 Five of Australia’s eight capital cities have turned in favour of landlords over the past year.
Vacancy rates fell in Brisbane, Perth, Adelaide, Canberra and Darwin between July 2019 and July 2020, according to SQM Research.
That means there were fewer investment properties on the market for tenants to choose from, which would’ve made it easier for landlords to find tenants and raise rents.
However, vacancy rates rose in Sydney, Melbourne and Hobart during the same period, which would’ve made it harder for landlords to fill their properties and would’ve placed downwards pressure on rents.
Hobart (0.70%) and Adelaide (0.90%) both had extremely low vacancy rates at the end of July, making them landlords’ markets.
Sydney (3.60%) and Melbourne (3.10%), by contrast, are tenants’ markets right now.